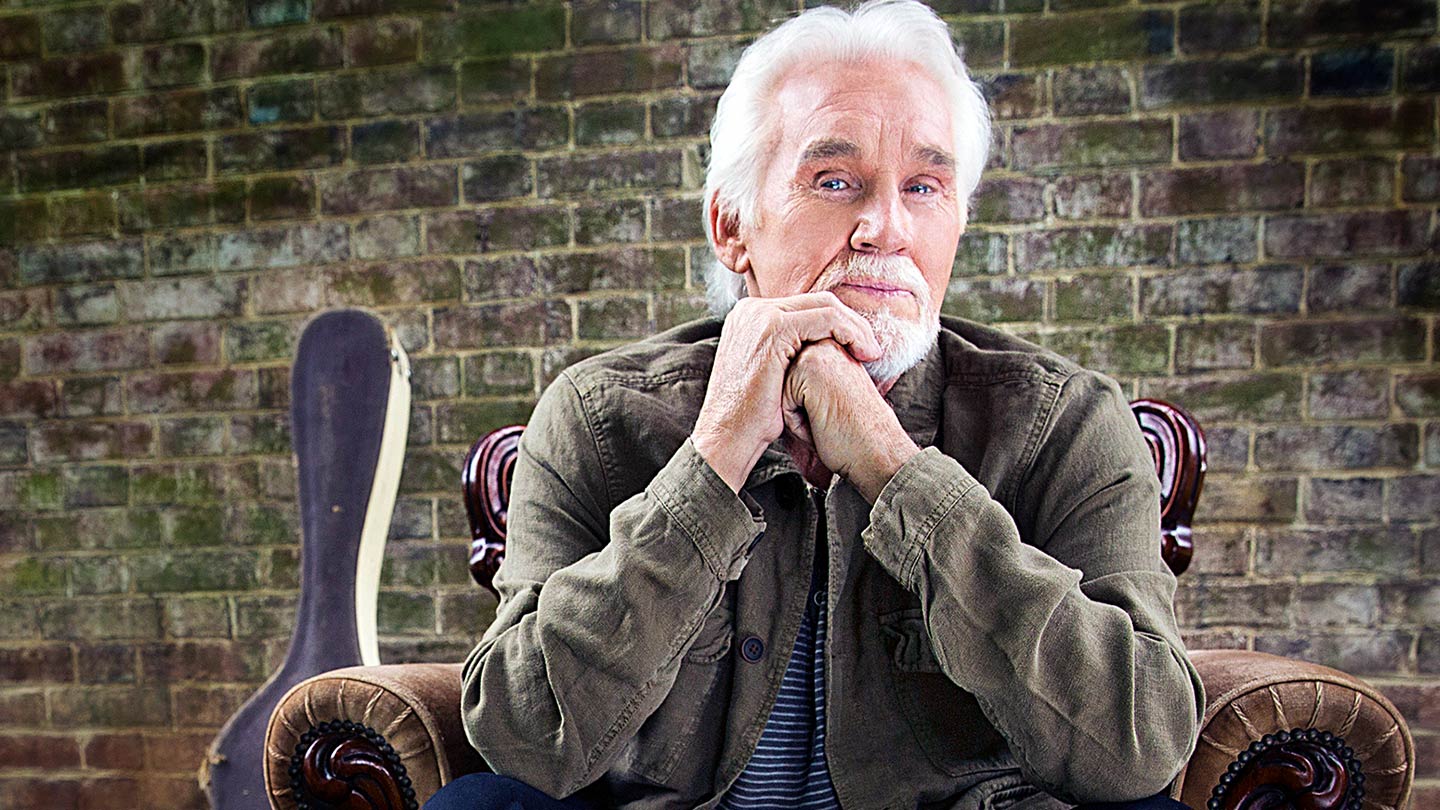 GRAMMY Award-winning country superstar and music icon Kenny Rogers has enjoyed great success during his storied career of five and a half decades.

The enduring Country Music Hall of Fame member and pop superstar has endeared music lovers around the globe with his amazing songs, heartfelt performances, distinctive voice, gift for storytelling and universal appeal. Rogers has played to millions of fans around the world, performing songs from his catalog of 24 Number One hits including “The Gambler,” “Lucille,” “Coward of the County,” “Ruby, Don’t Take Your Love To Town,” “Lady,” “Islands in the Stream,” “She Believes In Me,” “We’ve Got Tonight,” “Daytime Friends,” “Through The Years,” “You Decorated My Life,” and “Buy Me A Rose.”

The first country artist to consistently sell out arenas, Rogers has played to millions of fans around the world. Incredibly, he has charted a record within each of the last seven decades (’50s, ’60s, ’70s, ’80s, ’90s, 2000’s, 2010’s). He has sold more than 120 million albums worldwide, making him one of the Top Ten Best Selling Male Solo Artists of All Time, according to the RIAA. Rogers has won many awards for his music and charity work, including three GRAMMY Awards, 19 American Music Awards, 11 People’s Choice Awards, eight Academy of Country Music Awards and six Country Music Association Awards, including the CMA Lifetime Achievement Award in 2013.

He has been the recipient of the Lifetime Achievement Award from the International Entertainment Buyers Association, the Cliffie Stone Pioneer Award from the Academy of Country Music, and the Horatio Alger Award, given to those who have distinguished themselves despite humble beginnings.

Rogers earned a GRAMMY Award nomination and CMA Award nomination in 2014, along with longtime friend and collaborator Dolly Parton, for their new duet, “You Can’t Make Old Friends,” the title track of Rogers’ current acclaimed 32nd studio album released by Warner Bros. in 2013. “You Can’t Make Old Friends” was also included on the American Songwriter Top 50 Songs of 2014 list. The magical Kenny & Dolly reunion was only the third time in the studio together since their “Real Love” hit in 1985.

Rogers’ music has always crossed boundaries — his 28 Billboard Adult Contemporary Top 10’s is sixth-best all-time, and fourth-best among men, trailing only Elton John, Neil Diamond and Elvis Presley. Rogers was the only male artist to notch Billboard AC Top 10s in the ‘60s, ‘70s, ‘80s and ‘90s (only Barbra Streisand also managed that feat in those decades). Rogers has sent the most country No. 1’s to the top spot on AC (five of his eight AC No. 1’s were also country No. 1’s) and no core country artist has crossed over more titles to AC.

He is still making monumental cross-over appearances at some of the world’s most prestigious festivals up to this day. In 2013, Rogers gave his first performance at the largest outdoor arts spectacle, the Glastonbury Festival, playing to over 130,000 enthusiastic fans, and at Morocco’s world music, Festival Timitar, with upwards of 100,000 people in attendance. In 2012, the country legend was welcomed with open arms at popular U.S. festival Bonnaroo, where Rogers performed his own set with surprise special guest Lionel Richie and later joined Phish on-stage as a surprise guest himself for a rousing version of “The Gambler.”

Houston-born Rogers formed his first band while in high school in 1956—a doo-wop group called the Scholars—and has never quit making music. He charted as a solo artist in the late ’50s with “That Crazy Feeling” and performed the song on American Bandstand, played stand-up bass in the jazz group the Bobby Doyle Three (appearing on their album released by Columbia Records), and in 1966 became a member of the popular folk group, The New Christy Minstrels.

The spotlight started focusing on Rogers when his group, the First Edition, scored their first hit, “Just Dropped In (To See What Condition My Condition Was In).” Pop and country chart success followed for the band with “Ruby, Don’t Take Your Love To Town” (when the group officially became known as Kenny Rogers and the First Edition). A string of hits, including “Reuben James,” “Something’s Burning” and “Tell It All Brother,” and a TV variety show called Rollin’ continued to make the popular group relevant. But it was Rogers’ breakthrough, GRAMMY-winning performance of “Lucille” as a solo artist in 1977 that propelled him to superstardom, launching one of the most prosperous careers in the history of music. Certified gold, “Lucille” was named Song of the Year and Single of the Year by the Academy of Country Music and also earned Single of the Year honors from the Country Music Association.

“Daytime Friends,” “Sweet Music Man,” and “Love Or Something Like It” continued Rogers’ run of success. Then came his smash hit, “The Gambler,” a story song so vivid it not only delighted country and pop fans, it also became a TV movie, starring Rogers himself in the title role as Brady Hawkes. The movie spawned four follow-ups, making it the longest running miniseries franchise on television. The five Gambler mini-series have attracted over 100 million viewers nationwide and launched a second career for Rogers as an actor on television and movies, including another TV movie based on one of his #1 hit songs, “Coward of the County.” While drawing new listeners and fans to country music in the 1980s, he came to embody the role of the sensitive male, singing such romantic hits as “Through The Years,” “She Believes In Me,” “You Decorated My Life,” and “Lady,” the biggest song of his career.

In 1985, Kenny participated in the historical USA For Africa recording of “We Are The World,” the multi-celebrity performance which raised millions of dollars for famine relief in Africa. A year later, he co-chaired the audacious “Hands Across America” fund-raiser for America’s hungry.

Into the late ’80s and ’90s, in addition to worldwide tours, recording new music and forming his own record label and management company, Rogers established himself as a well-respected photographer, publishing several books. He was even invited to the White House to shoot a portrait of First Lady Hillary Clinton. He also authored several short stories, and appeared off-Broadway in his Christmas musical, The Toy Shoppe, which he subsequently toured.

In 1999, Rogers returned to the charts in a big way on his own record label, Dreamcatcher, with the hit and Number One video, “The Greatest,” and when the follow-up, “Buy Me a Rose,” hit Number One in 2000, Rogers, at age 61, became the oldest artist in chart history to have a Number One solo record on the country chart, proving his talent was just as vibrant and meaningful as it was when he first started out.

Never one to rest on his laurels, Rogers is now a New York Times best selling author. His autobiography, Luck or Something Like It – A Memoir, became a New York Times Best Seller shortly after its 2012 release. A producer of several books of photography, Rogers received an Honorary Masters of Photography from the Professional Photographers of America in 2014.

Remaining a popular entertainer around the world, Rogers, who was once voted the “Favorite Singer of All-Time” in a joint poll by readers of both USA Today and People, still loves touring and recording new music. “I really, really love what I’m doing,” Rogers says. “People survive longer if they love what they’re doing—because you just don’t quit.”